In 1991 Clint Stevenson, with help from his father Wayne and mother Marian purchased a ranch on the south bench in the south eastern corner of the beautiful Judith Basin. The rolling hills grassland ringed by beautiful mountain ranges with plenty of pastureland to graze Angus Cattle became the home to Stevenson’s Diamond Dot Cattle Company. In the fall of 1992 Clint and his new bride Adana fresh out of college began their life together in the ranch’s “rustic” farmhouse complete with its “cowboy shower” a wooden palette on the cement basement floor. Over the next few years corrals and a calving barn were built to accommodate the growing cow herd and eventually Clint acquired a large neighboring property along with other properties near Hobson and over time combined this land with several leases in the surrounding area.

As the ranch grew and expanded so did the family beginning with the birth of a namesake for Wayne Stevenson who passed away in 1994. Little Wayne was quickly joined by sisters Faith, Abigail, Rachael and brother Carson. With the expansion of the ranch and family a new home was built just up the road from the original place and it is here the annual Fall Production Sale is held. Today Clint and Adana’s children stay extremely involved in the day to day work on the ranch. Abby and Rachael both currently attend MSU Bozeman where Abby works towards a degree in veterinary medicine and Rachael pursues a degree in political science while rodeoing for the Bobcats! Carson is currently a senior in high school and enjoys rodeoing on the weekends and has goals to continue to expand and improve the Diamond Dot Cattle herd in the future. Faith owns and operates Diamond Dot Performance Horses raising, training and selling horses as well as heading up the advertising for the Diamond Dot, night calving and helping with day to day operations on the ranch.

Although Stevenson’s Diamond Dot was officially started in 1991, the cow herd traces back even farther with Clint’s first heifer in 1977 and is heavily influenced by Stevenson family genetics dating back to the first Stevenson production sales as early as 1960. Later Wayne’s Basin Angus cow herd, a select group of heifers and cows, and several groups of embryos helped to establish the Diamond Dot cow base. Clint developed an eye for cattle at a young age while accompanying Wayne in his truck while feeding and checking the cattle. From these early experiences Clint learned about the hard work and dedication it takes to build a great cow outfit. Diamond Dot has always strived for efficient, high maternal, sound, good uddered cows with fleshing ability to handle the harsh Montana weather. The cow base is highly influenced with Traveler, Rainmaker and Basin Max 602C bloodlines. The cow families consist of the famous Basin Lucy, the high production Blackcap, high marbling Trojan Erica and the ever popular Enchantress cow families along with many others. In the summer the cattle graze from the rough river breaks, to leases in the hard grass Belt Mountains to the west, to short grass native pastures, improved pastures and lush creek bottoms. The calves are not creeped and the cows are not pampered, and are fed a high straw ration if conditions dictate before calving.

In the early years, as cow numbers were being built and the ranch was being stocked, Diamond Dot ran many yearling steers along with a group of commercial cows. Through the years, Diamond Dot has experienced many sides of the business from selling feeder calves right off the cow, to buying and selling feeder yearling steers and heifers, to retained ownership. Today the cow herd has grown to be one of the largest, quality registered cow herds in North America. Along with home raised heifers and purchased heifers from our top bull customers Diamond Dot has one of the largest fall production sale offerings of bred heifers and cows that can be found anywhere.

Today Stevenson’s Diamond Dot markets its bulls and heifers each fall in our annual production sale at the Diamond Dot Ranch South of Hobson, also, bulls, females and embryos are available through private treaty sales throughout the year.

In addition to running a quality cattle operation Stevenson’s Diamond Dot also strives to be very innovative in its farming practices. While double cropping some crops on irrigation and raising small grains and most of its own feed supply with crops of wheat, oats, barley, peas, alfalfa, tritical, sudex, millet, and clover. With the short growing season Diamond Dot is one of the only farms in the area to raise corn silage and push its irrigated alfalfa ground to three cuttings.

Stevenson’s Diamond Dot utilizes the newest technology to develop its seedstock cattle from EPD’s, to Ultrasound, to DNA and kill data. Yet the most important thing to our operation is maintaining the phenotype and functionality of the breed, and the productivity and mothering ability of the cow, all of which made the Angus breed great and brings more profit to our commercial bull customers keeping us all in business into the future. 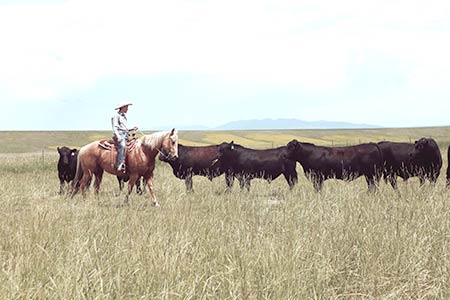 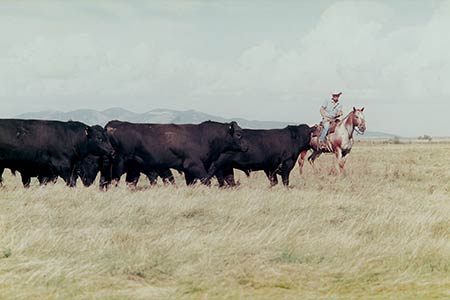